Bolder of the Cattails II 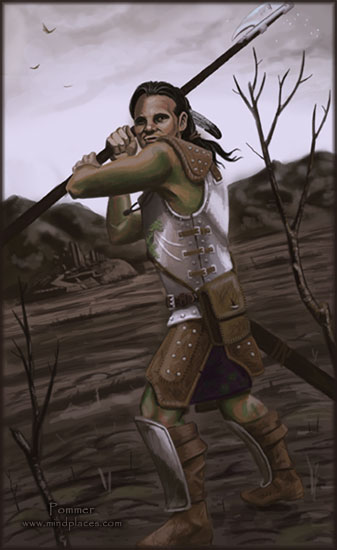 
Client Brief: Bolder and his companions were asked by an archbishop of Veluna to voyage to the northwest of the city of Mitrik and try to find out what the plans of the humanoid tribes were. The orcs and ogres had been harrying the humans of Mitrik, and defeating them at every turn. To enable Bolder and his friends to do this, a powerful spell was cast on them to turn them into orcs. This was not just an illusion or a "seeming" spell, this was a high level spell cast by a wizard that essentially turned Bolder and his friends literally into orcs. My playstyle with Bolder is that he is a big, dim, but nice guy. Unfortunately, he found the whole "being an orc" experience funny, and I played up him making a lot of crude jokes about his orc "equipment" and such, and at one point he had to actually eat human flesh or be discovered as an imposter by hundreds of orcs (and then probably die). When we were changed back to our natural forms, Bolder's transformation didn't go as planned - he didn't turn back to being fully human.

"A Hint of Orc: The PC was too fond of his orc body and acted very much like those vile and despicable creatures. Due to the constant crude humor, tasteless attacks against others he/she now has slightly longer teeth and a light greenish hue to their arms and legs."